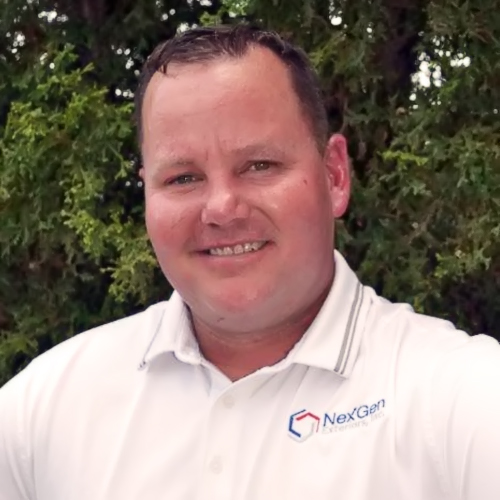 Robert started roofing at the age of 16 through a family friend that needed more laborers. After some time Robert and the other crew members went from being hourly paid employees to paid sub-contractors. This was unheard of at the time which makes him very proud to have been a part of this ground breaking step in this industry. From there Robert ventured into his first partnership where he stayed for seven years doing roofs. Wanting to do more than just roofs he decided to take a leap and began his own full general contracting company. Five years later Robert achieved his business goal of merging companies and working with his brother. After eight years in business together and over 15 of Robert wearing the jack of all trades hat, he made the life decision to take off that hat and accept the production manager position at NexGen. He is happy to be working with a family oriented company and for a new opportunity to be on the sales side as well as production.

Robert loves to be outdoors doing things like hunting and fishing. Musky fishing is his favorite. He is a father to a college baseball pitcher and a National Guard diesel mechanic in training.